After being surrounded by serious travellers who were chilling for weeks, months or even years in sleepy beach towns it was quite a culture shock to be thrown back into the land of the tourists. You probably don’t get any more touristy than Siem Reap where everyone is there to see the same thing but I have to admit that I really enjoyed our time there.

Maybe I was seeing things through rose tinted glasses as we were pretty much just stoked to be alive when we got there. Against all online forums and advice from fellow travellers we decided to take the night bus from Sihanoukville. We figured that the people bagging the trip were still alive to tell the story so it couldn’t be all bad and thankfully we were right. It pays to spend a few extra bucks on the ‘hotel’ style bus. We had little bunks and could fully lie down (NB: if you’re over six foot this will not be the case). The bus also promised free water, wifi, a toilet and TV – predictably it had none of these things but hey, we came out unscathed and managed some sleep so it was all good!

We found a great place to stay thanks to a recommendation from some friends we met on Koh Ta Kiev. The hotel is called Boutique Cambo and at US$20 per night this place is a treasure. The rate includes breakfast (cooked plus fruit, coffee, tea etc), Wifi and free tuk tuk rides into town. The rooms are spacious and clean plus the outdoor pool area (complete with outdoor beds!) is amaaaazing. After traipsing around the temples in the heat this is the best place to come back to. 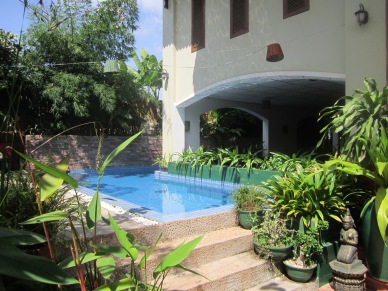 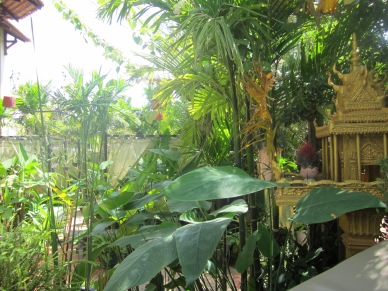 What really makes it a standout though is the service. The staff are all very well trained and speak great English. They’re happy to book buses for you as well as tours around the temples which is really handy with all the scams that go on. We ended up paying US$15 for a day tour around the temples and $25 for a longer trip (about an hour out of town) the following day. After reading some blogs from people who’d been ripped off and charged more than $80 it’s a way better idea to just sort it through your hotel or guesthouse I reckon.

We learnt quite a few lessons like this from our experience trekking around the temples. Yes we had the Lonely Planet with all the info but have you seen that chapter? It’s ridiculously wordy and needless to say it stayed virtually untouched. Personally I prefer bullet points. FYI if you’re ever in town, here are a few things to note. 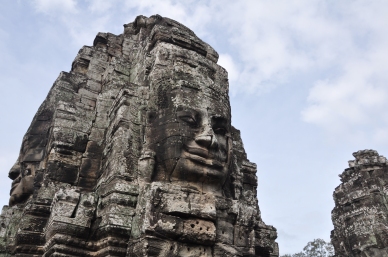 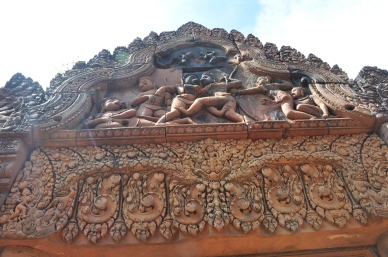 Oh and it turns out that there’s actually more to do in Siem Reap than visit the temples. What, you ask? Well how does a $2 shoulder/head massage in a night market sound? Oh yeah and did I mention that it would be front row at a complimentary ladyboy show? Yes friends, this could be you. 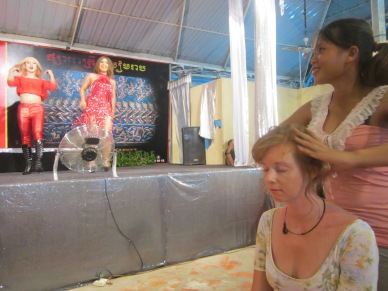 Possibly one of the most bizarre experiences of my life made even stranger by the presence of small children clustered at the side of the stage and the odd dog wandering around. Still, those ‘girls’ sure can entertain and the masseurs may be cheap but they know their stuff!

Ok confession time now…we went back for more the next night.

Also, the food. It’s all about the food for me in Southeast Asia, mainly because it’s always soooo good. The aptly named ‘Pub Street’ is the centre point of town (at least for visitors) and unlike Bui Vien in Saigon or Khao San road in Bangkok, this is one tourist trap that is actually quite charming. The main street is closed to traffic which is great – although get ready to refuse at least 7 million or so Tuk tuk drivers on your way down it. There’s also ‘The lane’ and ‘The alley’ (they keep things nice and simple for us foreigners in Siem Reap) that run alongside Pub Street. These are super cute little walkways loaded with restaurants, bars and locals flogging baggy pants or silk art work.

Basically any restaurant you choose in this area with the word “Khmer” in the name will be good. That’s what we decided after trying ‘Traditional Khmer food’, ‘Khmer family restaurant’ and ‘Something or other Khmer’ (or something). As well as similar names, they also share suspiciously alike menus – actually I’m pretty sure they were literally the same, just printed in different colours. Not sure what’s going on there but the prices can’t be beaten ($3 – $6 for mains plus delicious cold draught beer for fifty cents) and the traditional dishes we tried were all excellent.

Amok is the national dish of Cambodia and was easily the highlight for me. We tried a few different flavours (below is fish, chicken, shrimp and pork) but fish is the traditional choice and you can taste why. The combination of tender white fish, lemongrass, turmeric, ginger and coconut cream all served in a banana leaf makes for one of the tastiest things I’ve ever eaten. The night after we destroyed this lot I had to order the fish again.

This soup was also incredible…it was called Khmer ‘family’ soup so not totally sure what was in it (again it was fish and coconut based though).

If you’re into a sweet treat then there are loads of fruit shake vendors around. Don’t pay more than a dollar for these (they’re not quite as good as the ones you get in Vietnam but they come close). Also, Blue Pumpkin does awesome ice cream in a (somewhat out of place) trendy, white mod setting. I can recommend the ginger and black sesame. Nom.

There’s also plenty of shopping options in this area. We went to the old market early in the morning which is the best time to go as most people are at Angkor Wat for sunrise. This means that not only is it super quiet but the vendors will drop their pants (literally as that’s what around 80% of the stalls sell) for you pretty quickly. Most of it is just souvenir crap but it’s still fun to look around and you do find the odd diamond in the rough – like my sweet new ‘gold’ Casio.

Never mind that the cheap and nasty metal gave me a slight rash… Thankfully I have my peace dove from the Landmine museum as a more meaningful souvenir from a place that I will never forget. Siem Reap- more than just a pile of old stones!