I’m going to be the size of a house by the time we get home. As I write this, I’m chowing down on a giant Vietnamese baguette (lighter and more flavoursome than the traditional French) with ‘head’ cheese. Sounds gross but we just call it that because there’s a big cow head on the label. It’s reminiscent of the little triangle cheeses you’d find in kindy lunchboxes back home (in the 90’s at least) and it’s yum. 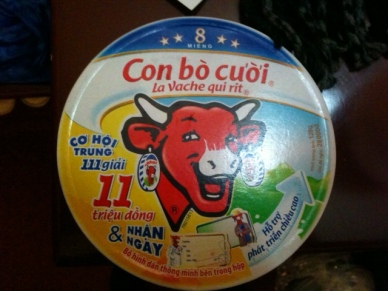 Of all the places in Vietnam I have to say that Dalat is probably the best place to eat. I can say this because a) I have (too much) experience eating in Vietnam and b) it was pretty much the only thing we did there.

Set high in the mountains Dalat is a favourite holiday destination for locals wanting to escape the heat of Saigon. For Westerners it’s becoming an adventure getaway with canyoning, mountain biking and trekking options all over the place. Not for these tourists though.

After our first night bus experience we were feeling lucky and booked another to get to Dalat from Saigon. We’d spent the previous 14 hours on a bus from Siem Reap so all in all it was 24 hours of travelling. If you’re thinking of doing the same then take note that the ‘direct’ bus to Saigon is anything but. We stopped every two hours with an hour long stop in Phnom Penh. Nobody needs to pee that much. The night bus to Dalat wasn’t as comfortable as the ‘hotel’ bus we had in Cambodia but we got there in record time…an (alarming) hour and a half ahead of schedule. Best not to think about the logistics of that. Here’s what our accom/transport looked like:

Needless to say we were feeling a bit jaded when we arrived in Dalat and were in need of some reviving. By some miracle the first place we stumbled across happened to serve the best Pho (noodle soup) I’ve had yet- yep even better than in Hanoi. The fried bread was fresh from the er..pan and the broth was so full of meaty flavours and fresh herbs. I’m not usually one to have soup for brekky but I would happily eat this every morning. 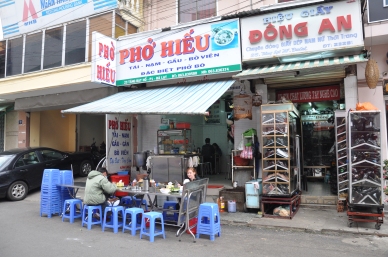 Post brekky we checked into our hotel- Dreams. We were aiming to stay somewhere cheap but after checking out this place on Tripadvisor we had to go. It has one of the highest ratings I’ve ever seen and after staying there I can safely say, believe the hype. Check out the view from our room.

The shower was great and had glass doors which if you’ve travelled in Southeast Asia you’ll know is nothing short of a miracle. There’s also a sauna and spa on the roof (!)

Oh and it had THE best breakfast spread. Set in the cosy basement, all the guests share a table so it feels like a real family affair. Every morning from 6.30 the table is full of freshly cut mango, papaya, dragonfruit, pineapple and watermelon. There’s also warm baguettes, crispy bacon (a rarity here), ham, cheese and Mrs Dung the owner will cook eggs any way you like. There’s even Marmite, Vegemite and peanut butter (another miracle).

Mrs Dung herself is a dream and will make sure that your stay is very comfortable. She owns three hotels so make sure you ask to stay at Dreams 1 if you want the spa (Dreams 2 is a lot newer but I’m not sure if it has one and we didn’t come across Dreams 3). Also, if you book a bus from Saigon with Phuong Tranh there’s a free shuttle you can catch from the Dalat station that will drop you off at the hotel. At US$25 a night, this place is worth it.

Eventually we managed to drag ourselves away from the hotel to check out some of the sights. Dalat is really cute and feels like a safe little town but if there’s one thing to watch out for on the streets there it’s the Easyriders. A while ago some company set up motorbike tours in Dalat and called themselves the Easyriders. Then it seems, so did several hundred other companies, hoping to make a buck off their good reputation. I have no idea how you tell which is the original so be wary if you are booking a trip. We were not in the market for one but as it was the low season during our stay we were approached about a thousand times a day. Avoid eye contact and cross the street when you see a branch as these dudes are persistent!

One Easyrider actually gave us some (confusing) directions to our first tourist activity in the city though- the Crazy House. This place is somewhat hyped in Lonely Planet and obviously people buy into it cause it was swamped…mainly with Russians. The artist behind the house studied in a famous Moscow architecture school and her OTT creation is very Gaudi like. Crazy? Hmmm, not so much but somewhat interesting if you’re into strange looking houses. It’s set up like several tree trunks each with animal themed rooms that you can stay in if you don’t mind people poking their nose in at you all day. Also, the artist and her family live in one of the structures (they keep the windows drawn during visitor hours) so that in itself is a bit odd. 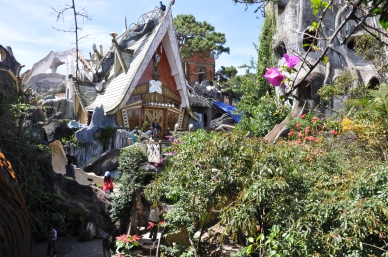 The tiger room was particularly creepy. 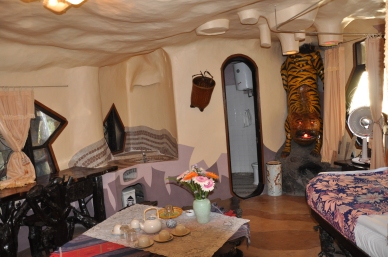 Personally, I think just wandering around Dalat is a better option as the leftover French colonial architecture is beautiful and gives the city a real European feel. It has been dubbed as the Vietnamese version of Paris and even has an Eiffel tower (slash radio tower).

The lake is a great place for a stroll or a tandem bike ride as we found.

We didn’t splash out on the paddle boats but they were tempting…as were the horse drawn carriages. The Vietnamese sure know romance. 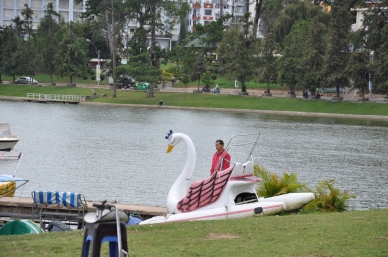 There are gardens and a golf course by the lake but other than that there aren’t so many things to see around town. After some research we found a cable car that takes you over the mountains to a pagoda (Truc Lam). It looked like a fun ride but unfortunately was closed for maintenance when we arrived. Luckily our taxi driver had a book of other pagodas in the area (they’re not sparse apparently) so we told him to take us to the most popular one- Linh Phuoc.

It’s crazy that the crazy house is in Lonely Planet but Linh Phuoc pagoda isn’t. It is impressive to say the least.The mosaic work is absolutely stunning and the towering dragon with scales made from recycled beer bottles is epic.

There’s also an amazing view over the city and surrounding farms from up the top of the neighbouring temple and check out this GIANT buddha made from wire and threaded with tiny flowers. That’s me on the left so you can see how massive it was!

In terms of sights that about ends our experience in Dalat but it was more just wandering around in the cold that gave me a buzz. Coming from tropical temperatures and getting to wear a cardigan and a scarf was such a novelty! There are also plenty of lovely restaurants to escape the cold and get cozy in.

We stuck to the main ‘backpacker drag’ of Truong Cong Dinh street (not a backpacker in sight to be honest but a few other travellers around) and found several homely places with good menus. I can recommend Goc Ha Thanh – great service and the mango chicken is awesome. Also, Chocolate Café is fantastic. Get the chicken curry. We did – twice, it was that good. All the dishes in Dalat are full of fresh vegetables as the surrounding farms seem to supply the majority of fresh produce for the whole country. Coffee and wine are also produced locally here making them really cheap and really good (ok, the wine isn’t really good but it’s the best you’ll find here and I wasn’t lying about the coffee).

You’ll also find a lot of stands selling variations of piping hot milk on the street at night. There were so many people drinking it that we had to give it a go. There are three flavours- soy, peanut or green bean. I tried peanut and it was g-ross….basically liquid peanut butter which sounds great but isn’t. Green bean was a step up but still a bit odd- especially out of a bag.

The central market is another option for eating out but there’s not a lot of street food available during the day and the night market restaurants are overpriced in comparison to the nice restaurants around town. The indoor market is definitely worth a look for yummy vege chips (serious natural vege chips including green beans!), dried fruit and fresh juices but a quick visit will do the trick as the stalls all sell exactly the same products. Lan Anh farm outside the market has a nice selection of Dalat specialties at reasonable prices with no bargaining required.

So there you have it. Dalat on a plate, I would definitely go back for seconds.