I know that’s a controversial way to start but there it is.

Of all the places we had planned to travel to on this trip, Sapa was the one I was looking forward to the most. It’s never a good thing to have high expectations for anything but I couldn’t help it after hearing so many rave reviews from friends and other travellers. Needless to say I was pretty excited when we booked a four night, three day tour through our hotel in Hanoi.

Most of all we were looking forward to the epic rural landscapes that in my head looked like this: 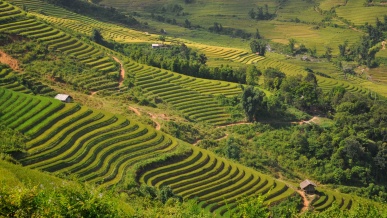 So it was a little disheartening when we looked out from our hotel named ‘Sapa Grand View’ to this:

Ok, so not much can be done about poor weather conditions but the travelling conditions weren’t much better. To start with, we shared a cabin on the night train from Hanoi with Mr Intolerable. After a two hour shouting match with someone on the end of phone number one, he then proceeded to have another long conversation on phone number two. This was followed by the playing of a very loud Vietnamese radio show beaming out of a mini speaker that he clutched to his chest while he fell sound asleep…so much so that we had to shout to wake him up and politely ask if he would turn it off. This he couldn’t quite manage but he did turn it down slightly for the rest of the ride.

The situation was made even better when we woke up and realised our train had was three hours late getting into Sapa. This meant we would have much less time in town but at least we had a nice hotel to go to and get ourselves clean.

Or so we thought. The hotel was crap. First off we were shown to a room that appeared grand…or at least was about twenty years ago.Unfortunately it was even colder than the downstairs restaurant area. After a quick peek out the curtains it was clear why. Instead of replacing a broken window, the hotel had opted to cover it with something like tarpauline and there was a hole in the patchwork.

We were moved to another room which was still as icy and hadn’t been cleaned so after wandering around town in the cold while waiting for it to be serviced we finally had somewhere to dump our bags. We asked for a heater and they asked us for money. By this point, we didn’t really feel like paying. Luckily our hotel in Hanoi were able to get in touch with the management and sort us out one free of charge but when it arrived it appeared to be less a heater and more a really strong light bulb.

What the pho is right.

Still, we were there for the outdoors really (we kept telling ourselves). Our first trek was through the thickest white out I’ve ever experienced in my life. Our guide kept stopping at look outs along the way to tell us what we were missing so that was nice of her.

Here’s me getting excited by the views. 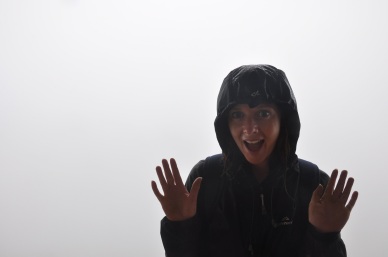 We trekked through a local village and were shown a water mill (that wasn’t actually in use but had been placed there for tourists as our ever honest guide told us – bless her). We also saw a rather unimpressive waterfall and were shown the place where we would have seen a traditional dance…if our train hadn’t been so late.

The trek didn’t take long so afterwards we were looking forward to a nice wander around Sapa village. What we didn’t count on was the tribe of woman who would follow us the entire way asking for money. Technically they weren’t begging but I never actually saw what they were selling as they were too eager to throw the chunks of language they knew at us; “Where you froooom? What your naaaame? Why you no buy from meeee? Maybe lateeer? Promeeeese?” Thankfully we found a little bar to escape into. They served hot wine and had a fire. We stayed there until dinner.

They also had these peculiar blue screen glamour shots of babies around the place. Odd.

If there was one redeeming factor for the hotel, it was the food. They kept us well fed and even made the early set meal times worthwhile. However, there was an incident where they brought out chicken on a hot plate and managed to smoke out the dining room. We had to sit in the (already cold as there’s no heating) restaurant in our jackets with the windows open. But damn, that was good chicken.

The conditions made for a slippery and uncomfortable trek with quite a few bails along the way so I was grateful for the kind local lady who helped keep me upright- all while holding a baby on her back! At one point (after she’d stopped helping me I’d like to add) I saw her breastfeeding while trekking. These ladies have multitasking down. 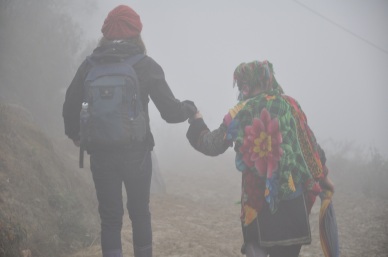 When we arrived at the stop for lunch I knew there would be some kind of proposition from my helper so I bought a wee purse from her. Unfortunately this didn’t make me exempt from the other million or so other ladies who swarmed around us like brightly coloured mosquitoes for the entire meal. Oh and the meal was cold instant noodles, yum. At least the yoghurt (which had frozen due to the conditions) was a happy discovery, I’m putting all mine in the freezer now!

The second half of the trek was somewhat easier although a couple of the girls still managed to get stuck in up to their knees in mud. Most of us opted for the gumboots that the locals wear. You can hire them from plenty of shops in Sapa and if you’re going at this time of the year I’d highly recommend doing the same.

When we arrived at the homestay it was pretty much what I’d expected in that it was not a homestay at all. In saying that, it was much more comfortable than the hotel even if we did receive the odd visitor holding up gaudy shirts for sale. As for the hosts, we didn’t speak to them and they didn’t speak to us. The only contact we had with them was through our guide and we didn’t share meals either (they would cook for us and retreat to the kitchen). In reality, the homestays are guesthouses set in local villages but we still managed to have fun with the other guys on the tour, sitting around the table playing cards, sharing delicious food and choking down disgusting local rice wine (seriously, think how bad tequila tastes and amplify that by about a thousand).

Aerial shot of the dining/living/everything but sleeping room.

Dinner wound up by about 7pm and given that there were no windows, doors or fires in the house, we decided to head down the road and find some heat elsewhere. We managed to find a great little bar run by a Dutchman and his Vietnamese wife. They had a fire (er some embers in a bowl) and mulled wine as well as Jenga and Uno so we were happy.

For some reason it feels a lot later than normal when you’re in a village that gets dark around 5pm so it was off to bed pretty early. We stayed out the latest and came back to find everyone tucked up and plugged in. Yes, the homestay had wifi.

Funnily enough the homestay was miles warmer than the hotel. They had the most epic thick blankets I’ve ever encountered and because 13 people were sharing the same space I guess we kept each other warm. 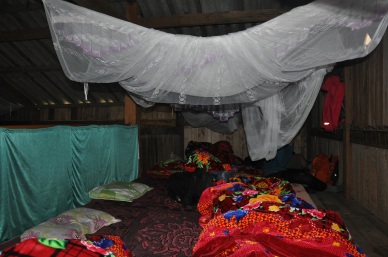 The next day was a more enjoyable trek but I think I may have just been in a good mood because we were closer to getting back to Hanoi. We did get a bit of a view at least and some real shopping was had once we’d swatted away the usual street dwellers.

I guess we were a bit miffed with the whole experience because we had paid for a tour and at times it really didn’t feel organized. The whole time we were asking each other what was happening as we were never given a full briefing. There was talk of village market visits that never happened and it seemed like the whole thing was a bit on the fly. We also learnt next to nothing about the fascinating culture of the hill tribe people who live in the villages – aside from the fact that women seem to do ALL the work.

To be honest, it’s kind of our own fault for not doing more research.  Booking organized tours through a hotel is apparently a no-no if you’re after quality (in Hanoi at least it seems). Still, we couldn’t really be arsed spending a full day in the city planning for the trip so it felt like the best option.

A word of warning if you’re going to Sapa – check the weather forecast and pay more to stay in the one hotel in town that actually provides heating. I’m not sure what it’s called but it sure as hell isn’t Sapa Grand View.

I should say that the hotel realised their mistake (after we had to fill out feedback forms as a group and wait in the lobby while management read them! Awkward!). We were given bread, bananas and water for our return train as a ‘sorry’ present. The token was sweet but I hope that they took it to heart as they’re only going to end up with more cold grumpy guests.

As for this cold, grumpy guest, she’s glad for the experience deep down. I think it’s just hard for any place that boasts natural beauty to come close to my home, New Zealand.