Our first experience of Vietnam was Hanoi. We arrived in February after a week long stint in beautiful Koh Samui in Thailand and coming from a blue sky tropical paradise sure made the cold grey reality of the old quarter hit harder. Still, it was a lasting impression that we will never forget.

The second time around I expected Hanoi to be a bit ‘same same but different’ seeing as we had spent the better part of a year living in the south of the country. It’s only now that I can compare Vietnam’s two largest cities, I see why there is such a difference in culture between them.

Tom and I often romanticised Hanoi as feeling like ‘real’ Vietnam. We arrived during Tet when everything (I mean everything) was shut and the only life we saw was snatches of people crowded around intimate family meals. We felt like outsiders looking in at something sacred and special of which we couldn’t really understand or particiate in.

Saigon on the other hand seemed to open us with both arms, inviting us in for a beer, tempting us with bright lights and familiar creature comforts. I remember as we were trying to settle into the city, we often went to the movies. It’s funny how when you’re travelling you’re thirsty for adventure and anything different but when you’re trying to assimilate into a place that is so far from home, any semblance of normality from your previous life is such a welcome novelty.

After nine months of living in the city though we were ready for less Starbucks on every corner and more of the ‘real’ Vietnam we remembered from our first days in the country. The second time around, Hanoi did not disappoint. The old quarter was worlds away from the stark, lifeless space we encountered during Tet but it was still as steeped in history as we remembered. We spent hours traipsing around the maze of streets and managed to get lost every time. Getting lost here though is a wonderful thing and leads to fascination rather than frustration.

We also found a really good value place to stay after deciding we couldn’t stomach the first $10 a night dive we found. The little Hanoi hotel (46 Hang Ga street) is great. It’s right in the old quarter, we had a huge room for $15 a night which included servicing, wifi and a decent breakfast. Also, Lisa on reception is such a darling and looked after us really well. We ended up spending hours chatting together in a coffee shop, she’s very friendly and helpful. Don’t be fooled by the hostel of the same name next door though- they’re not affiliated.

Ofcourse when we were arrived I was thinking with my stomach and eager to try Northern food again. It may be hyped as the best in the country but after sampling for the second time, I’m going to have to side with the Southerners on this one. I mean pho is great and all but the flavour doesn’t beat a well made banh mi packed with chili, pate and coriander. Also, I think we were spoilt for choice when it came to restaurants in Saigon. One night we could be eating at a great gourmet pizza place and the next at an authentic meditteranean joint. Saigon was full of expats who owned businesses and knew how to make their food taste as good as home. I guess we expected the same options up North.

One night here we had an insatiable craving for Indian food. It took an hour of traipsing between the very few Indian restaurants in town before we could find one that didn’t cost an arm and a leg. I’m sorry but I refuse to pay close to US$5 for rice! Luckily we found a great place that was super authentic and tasty- Little India (32 Hang Tre street, Hoan Kiem district) They made THE best malai kofta curry and the chili potato bhaji is something else – those are whole chillies wrapped in potatoey goodness.

Choice is one thing but we also struggled to find decent restaurants that make authentic Vietnamese food. It’s easy enough to find one that has a split Western/Vietnamese menu but we wanted the real deal. I realise the old quarter is the most touristy part of town so this is their best way to attract customers but Saigon certainly didn’t lack true blue Vietnamese places, even in District 1. Thankfully New Day restaurant (72 Ma May street) saved the day. We went three times as it was too good to risk going anywhere else. It may not have a romantic atmosphere – the tables are long benches so you’ll most likely be seated with other diners- but what it lacks in ambience, it makes up for in flavour.

If you want truly authentic in Hanoi then you can’t go past a street food experience. This was the only way we ate when we first arrived in the country (despite the warnings) and it’s rarely a disappointment. A new discovery I made this time around is Nom thit bo ko – beef jerky salad. It’s a mix of shredded green papaya, jerky, a pastrami type meat swimming in sweet fish sauce and covered with herbs and crushed peanuts. It really is nom.

Beer drinking is another great experience to be had in Hanoi. Sorry Saigon, you’re doing it wrong. Somehow, potentially due to Tet, we didn’t discover the wonders of bia hoi until our second time in the city. It’s essentially fresh beer that is made to be drank the same day that it’s brewed. Oh and it costs as little as 25 cents a glass. There are plenty of places in the old quarter where you can pull up a tiny plastic chair and sip away while you watch the crazy traffic. 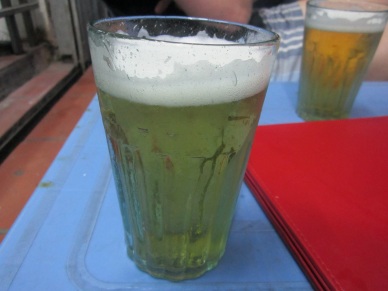 The only problem with drinking in the city is that you’re on a time limit. Around 10.30/11pm, the establishments all start cleaning around you and expect you to ship out. There are some bars that bend the rules and thanks to a tip from a friend made through the blogosphere (check out her very amusing account of life in Hanoi here) we were able to experience one – Barbetta 2. It was super hipster cool and awesome to look at. Propaganda graffiti was everywhere and if you didn’t feel like hitting up the dance floor there were cute little alcoves full of comfy old chairs and shisha pipes.

Before we headed there we also had a drink at a cute place in Ba Dinh district called Bar Ete where the drinks are both well mixed and well priced. We also ate dinner in Ba Dinh at a popular beer place called Paradise (thanks again to Susan for taking us out!). Here you can get beer in these strange 2L carafe things. We were doing it wrong by sharing one between two it seems. The curfew was well enforced in this place though as it was dead by the time we left (around 10).

It may not have the night life or the culinary variety of Saigon but one thing Hanoi isn’t lacking is culture. We spent an entire day getting acquainted with the attractions that we missed out on last time around. We started with the Ho Chi Minh mausoleum. You have to get there early as it’s only open for a few hours in the morning (and is closed Monday and Friday). We joined a very long but steadily moving queue around 8am and walked in a slow procession for a few blocks. Most Vietnamese people are very well dressed for the occasion so don’t go looking like a beach bum. Also, try not to take anything. We had to ship our camera around to several different locations before we entered and then had to pick it up from a completely new counter after we’d gone through. Painful process. 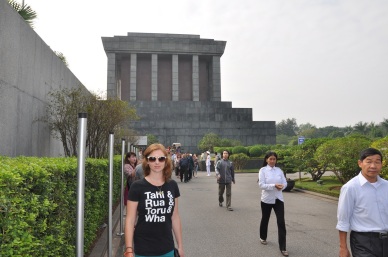 The mausoleum itself will take you approximately 45 seconds to walk through but I still recommend it. It was amazing to actually see the man in the flesh. Uncle Ho is remarkably well preserved (apparently his body is restored once a year in Russia) and flanked by four very impressive guards. Everyone walks slowly in silence and noone is allowed to stop. It’s an eerie experience that was very memorable.

You can also check out the complex around the mausoleum where Ho Chi Minh used to live and work. This costs 20,000 VND ($1) and is interesting but a little dull. There’s also the Ho Chi Minh museum which looks stunning but doesn’t have a lot of information inside (in English anyway). If you’re after an art exhibition though, it’s great.

From there, we walked to the Temple of literature which ended up being more of a fashion show for us than a historic experience – I far preferred it. Turns out that we were there on graduation weekend and loads of Uni students were there posing for their photos. The girls were dressed in a rainbow of beautiful ao dai (the traditional dress of Vietnam) and I couldn’t stop staring! It was fascinating watching them pose for thousands (seriously) of shots. 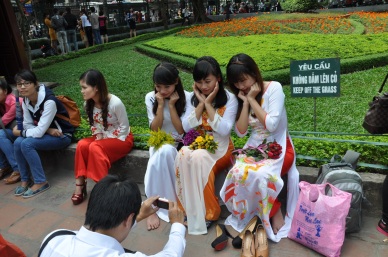 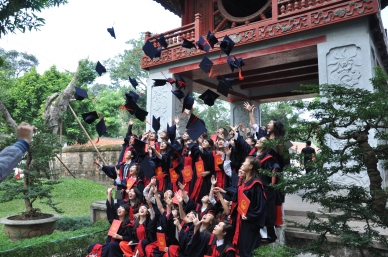 We also checked out the Hoa Lo prison which was quite grim but well set out and interesting. To be honest though, if you’ve been to the war remnants museum in HCMC then you could skip this one.

The realistic models of prisoners are so creepy. 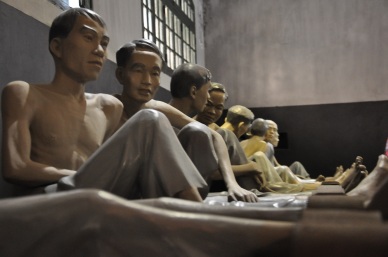 The Vietnamese women’s museum was our final stop for the day. It’s recently been renovated and there’s loads of English information (a rarity) and displays. Although, the focus is mainly on the culture of women living in the hill tribes as opposed to your typical Vietnamese woman.

For a more modern dose of culture I’d recommend strolling around the ever tranquil Hoan Kiem lake that acts as the focal point of the city. Once you take a seat you can count to three before an eager young thing will approach you for some English practice. You’ll probably get asked to have your photo taken with them too like I did which was totally a novelty coming from Saigon where expats are rife. The lake itself is such a beautiful and iconic part of the city. Standing on the red bridge and gazing out at the view is a great way to pass the time and the pagoda on the lake is worth a wander around if only to people watch.

It’s fitting that Hanoi was our final destination in Vietnam. It feels like we’ve come full circle on our adventure and now have such a deeper understanding of the country than when we first arrived as deer stuck in the headlights, struggling to cross the sea of motorbikes.

Vietnam is the first country that I have lived in other than New Zealand and because of that will always have a special place in my heart. But it’s more than that really, Vietnam is truly varied, in landscape and culture. It’s a fresh spring roll filled with fantastic, exciting, scary, mental, hilarious experiences that you dip into a zesty delicious sauce and savour.

I’ll never forget the taste of Vietnam that we have had in the past year. One day I hope to come back and satisfy the cravings that I know I’ll have once we’re apart.